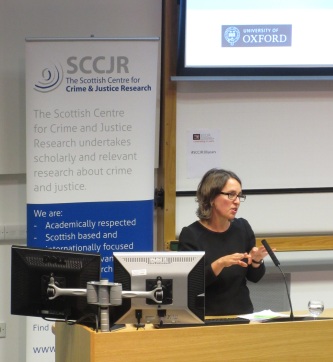 Professor Mary Bosworth provided an urgent, impassioned and at times startling account of immigrant detention as she delivered this year’s SCCJR annual lecture, warning there is “not just a legitimacy deficit but a compassion one” when it comes to the treatment of detainees.

At the end of the week in which it was announced that Scotland’s Dungavel detention centre is to close – and be replaced with a new facility near Glasgow Airport – Prof Bosworth shared findings from her major European-funded research project on the exercise of administrative power in such institutions.

She described a system in which detainees are reduced to case numbers within a system of detention that looks and feels like imprisonment … but without the certainty of a release date. Unlike prisoners, those detained have not passed through the courts in relation to their detention, and instead their fates are decided by civil servants whom they will never meet. 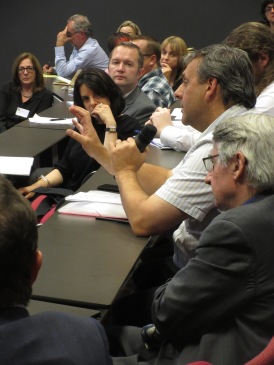 Images from inside detention centres showed bags full of paperwork creating a “false promise of order” and “paperwork for paperwork’s sake” while further dehumanising those whose information is logged and filed or simply bagged and binned. Prof Bosworth highlighted errors such as misspelled names being recorded as “aliases” or slip-ups changing the sex or nationality of detainees as examples of administrative power. She described detention centres becoming “sites of nearly pure administration”, with automation replacing officers and aspirations to be able to “scan” individuals as though they were no more human than goods in a supermarket. Such administrative power dehumanises and criminalises in uncontestable ways.

In this context, it was explained, penal and administrative power intersect and amplify each other, casting people as suspect, dangerous and “other”, not simply incarcerating and excluding them but casting them out of society. Foreign detainees “have to become unrecognisable so we can expel them,” said Prof Bosworth, and the current UK immigration system does this by masking their very humanity.

Prof Bosworth provocatively queried whether such detention centres serve a purpose beyond expulsion, serving in addition to construct and confer a permanent excluded status.

One thought on “A compassion deficit? How immigrant detention in the UK masks humanity”